The Tip Sheet Gets Inked

More than 45 million Americans have tattoos. Once part of the alternative scene, tattoos are more mainstream than ever—they’re still scarce at the highest corporate levels but this may change as the next generation takes the reins. About 17% of people with tattoos regret them. Understandably, the most commonly regretted tattoo is of the name of another person. There are no regrets at CHR, though. With their combined number of tattoos in the region of “too many to count,” the CHR crew is among the 20% of people with five tattoos or more. Here are their stories and some of their tattoos.

Kelly, whose tattoos number “too many to count,” sees them as both self-expression and self-care. “For me, getting tattoos is one of my outlets for taking care of myself, being in the moment. It’s something I do for me,” she said. She got her first tattoo at 18, a grouping of 5 stars that her boyfriend at the time drew. “I always wanted to get one and my mom said I could.” Her favorite, amethyst crystals and lavender sprigs. “They are both purple, my favorite color, and both help me clear my head and relieve stress. I have crystals and lavender everywhere in my house and office.” Her most memorable tattoo is of a butterscotch and strawberry candy that she got for her 92-year-old Mommom. “She always had these candies in her purse when I was growing up. It was something I could count on just like I could count on her.” When asked whether there were any tattoos she regretted getting, she replied with an emphatic “no.” The few that are not so well done I remember who I was with and when I got it. It signifies a moment in time for me. As for her next tattoo, she not sure what it will be she is sure there will be more. 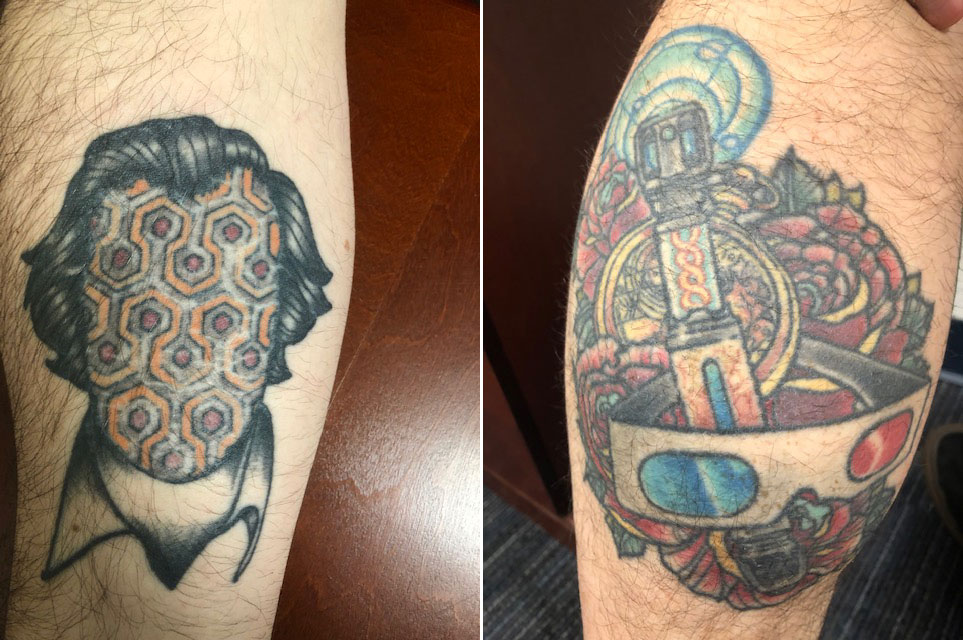 Sean’s tattoos (from left): Jack Torrance from The Shinning, Doctor Who collage aka “10: An ode to Tennant”

Sean got his first tattoo during a blizzard in State College, Pennsylvania. “It’s the outline of a bird with a sunset behind it with the words “live with passion.” He has 18 tattoos and counting. Tattoos are “a fun form of expression and art. Sometimes they have personal meaning and other times it’s just a neat piece,” he says. While he says he can’t pick any one favorite, he considers his Doctor Who tattoo that includes a number of David-Tennant-related items including his sonic screwdriver, 3d glasses, and roses, as his best looking tattoo. His most recent tattoo is a small UFO drawn by his niece. “That’s the second UFO tattoo on my body.” As for what’s next, “I have an incomplete Simpsons Treehouse Of Horror leg piece that I’m chomping at the bit to finish! It’s about 70% complete.”

Number of tattoos: An indeterminate number
What she likes about tattoos: Their permanence 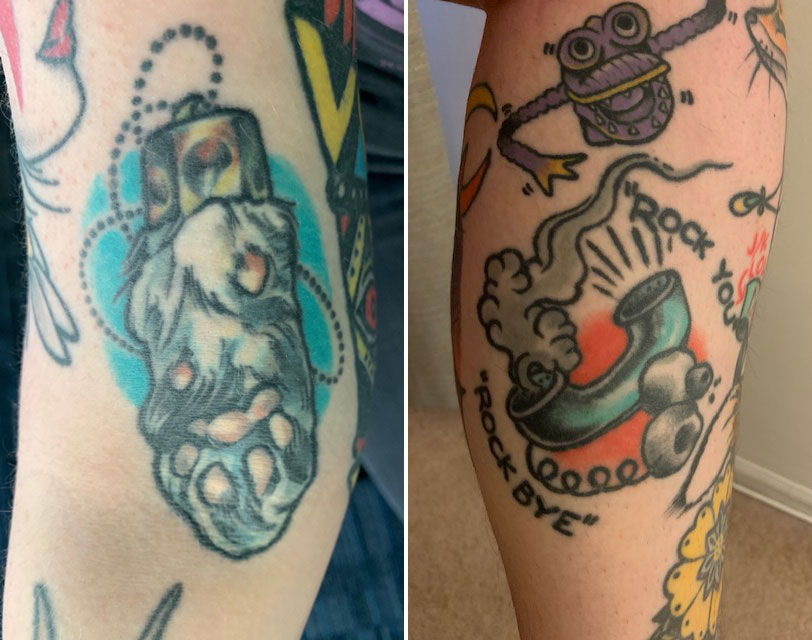 Brittany worked at a tattoo shop before she joined County House Research, so it’s no surprise that she says that at “a certain point, you don’t have a solid number anymore. That’s where I’m at!” She still gets tattooed once or twice a year. “I’m running out of space, so I need to be a little more particular.” Her most recent tattoo is a Toynbee tile on the back of her thigh. (Click here if you’re unfamiliar with the Toynbee tile phenomenon). For the last 3 years, she and her fiancé have gotten tattoos to celebrate their anniversary. “We’ve got about 6 months to figure out what the next one will be,” she says. Brittany’s first tattoo was a small black star on the inside of her wrist that she got when she was 18. “I badly wanted a tattoo, but needed something small and simple to cover so I could hide it from my family. 15 years later and I’m not sure they’d notice a new tattoo unless it was on my face.” Her favorite is of her 13-year-old cat’s paw tattooed on the inside of her arm. “It’s so well done and I like having her with me everywhere I go,” she says. Her most meaningful tattoo is based on a voicemail her dad left her about 10 years ago. “It’s a weird tattoo, it was a weird voicemail, and he’s a weird guy. He’s still around, it was just such a hilariously weird voicemail that I felt really compelled to commemorate the occasion permanently.” That permanency is one of the things Brittany like most about tattoos. “I suffered from ‘sticker anxiety’ as a child. Tattoos are forever, so there’s no fear of losing the good ones. I also prefer how I look with them, and feel ‘complete’ as a person for having gotten them.” As to whether tattoos are public or private expressions, she acknowledges that they can be both depending on location but when people run out of room they have to compromise. “It all depends on the person and why they got the tattoo when and where they did.” 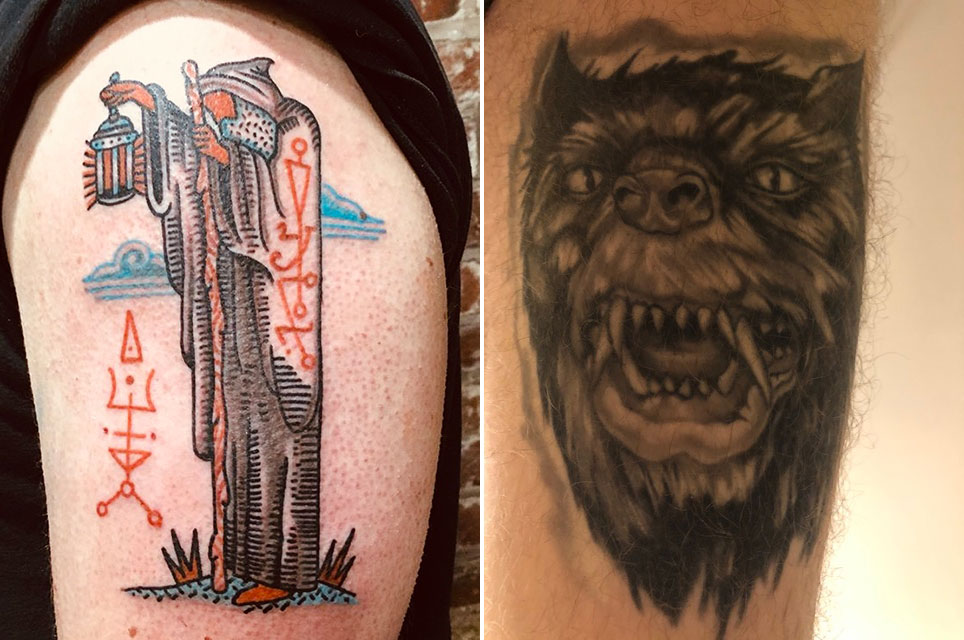 Phil’s tattoos (from left): The Hermit, Gmork from The Neverending Story

Phil, who also got a Toynbee tile recently, has nine tattoos and counting. His next will be a wasp coming out of a fig. “Google ‘fig wasp,’ it’s pretty gnarly.” Though he says tattoos are both public and private expressions of personality, “if you have a piece that spans half of your face, you’re probably forfeiting your right to label it a private expression.” His most meaningful tattoo is of a Hermit tarot card; his mom’s favorite. “The Hermit represents the sacrifices you make in pursuit of knowledge and personal growth. My mom has always nurtured my spiritual side, and while I consider myself a pragmatist at heart, her guidance reminds me to always keep an open mind.” 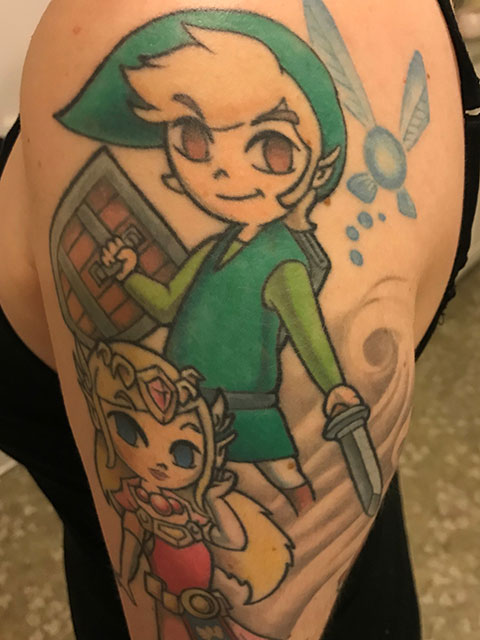 With only four tattoos so far, Jenn is still at the beginning of her tattoo journey. She sees tattoos as an art form of self-expression presented on a living canvas. Her first tattoo was of a panda drinking boba that she got when she was 18. She keeps her most personal tattoos are in clothed areas. Her public-facing tattoos are fun ones like her favorite Princess Zelda and Link from Legend of Zelda. “They are constant conversations pieces,” she says. For her next tattoo, “either expanding my Legend of Zelda sleeve or starting my X Files sleeve.”